At first glance, certain events seem irredeemable, absolutely down the drains of annihilation and beyond the grasp of salvation. One might wish and wish with all their might, but once past that finish line of destruction some things remain irreversible you see.

One example that comes to mind is preparing ògì corn pap in a pot that is atop a stove, and stirring absentmindedly until alas the pudding thickens, inadvertently setting into wobbly èko. Rapidly stirring in a futile attempt to salvage the situation only condemns it further, deeper into its solid state, because èko will never revert to flowy pap. Q.E.D.

Still on the topic of cooking, as I find that quite a number of culinary mistakes have a way of being stubbornly unresponsive even after being gently cajoled back to the path of purposefulness, overly-salty rice is another example.  How does one un-salt rice that’s bordering on becoming quite like Lot’s disobedient wife?  A lost cause, really.

Likewise, tears that have begun to run down one’s face.  One can’t un-cry those, so might as well have a good cry, ruined mascara or not, puzzled/alarmed spectators be damned.

In staying the course of bodily emissions, one cannot not add farts to this list, for a fart that’s been let out cannot be tidily tucked back in.  So, one might as well allow the offended others marinate in one’s own offensive essence. 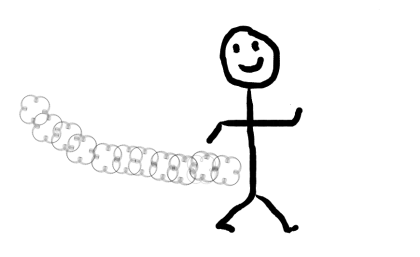 And whilst magnanimously permitting them to do so, one must have the requisite self-righteous facial expression in place, arranging one’s mug into an almost bored look as though one is oh so above the mortal act of emitting gases from the putrefied remains of digested food within their own bowels.